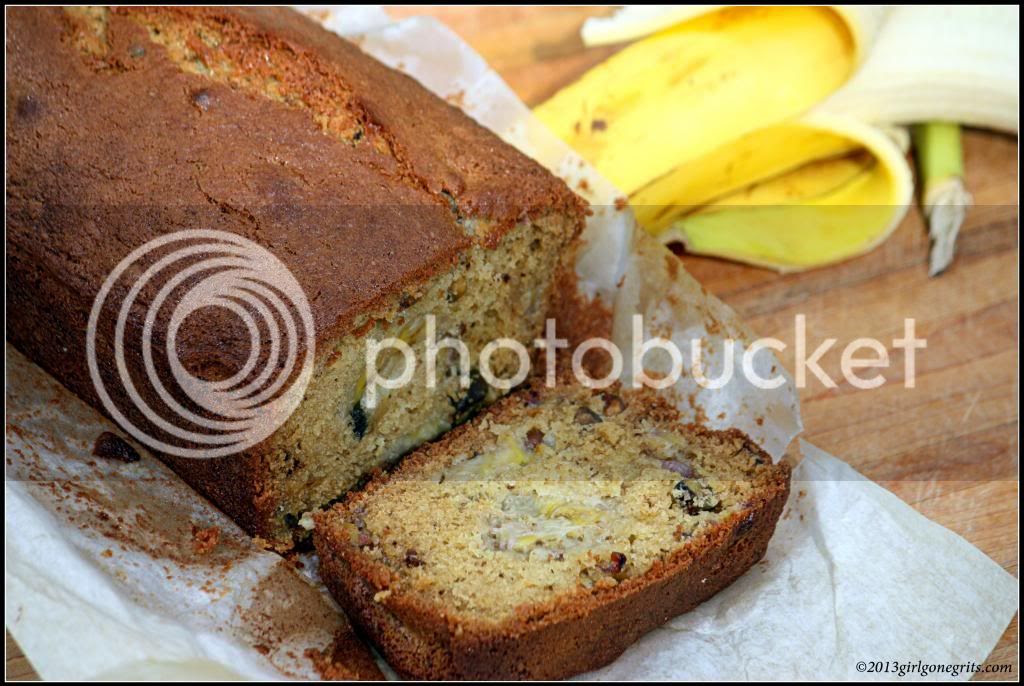 A week ago my neighbor came by to borrow some butter because he was making banana bread with his daughters and had run out. As soon as my daughter heard about what was being made next door, she started to go bananas (pun intended). It was as if banana bread had gone "viral" in our house. "Oh Mom, can you please make some?" and "Hey Mom, you know how delicious warm banana bread is, right?" Or,  "Mom, you know, I think it's perfectly ok to eat banana bread at all 3 meals including dessert don't you agree?"  Okay. I get it. Banana bread is now on this week's menu and my daughter's commentary forever earwormed in my head.

Over the years, I have made banana bread plenty of times. If you google or pinterest it, you will see that it's one of those recipes that has been made and re-made in every style imaginable, with versions including everything from coconut to chocolate chips to chili peppers in the batter. It has been made vegan, gluten free, low glycemic, paleo and raw. But I really just wanted to make my daughter the simplified recipe so I stuck with this one and modified it only a little. I doubled the recipe (because having an extra loaf tucked in the back of the freezer for those emergency "viral" or "earworm" moments) is a "super-mom" point maker.  I exchanged the walnuts for pistachios just in case my husband wanted some (he is allergic to peanuts/pecans/walnuts).

This recipe calls for slicing the bananas rather then mashing them. It claims to be really moist and that is what I was after. When I was pulling it out of the oven and its intoxicating aroma filled the house, I realized right then why we all go bananas for banana bread... I'm jus' sayin'!

Combine the following in this order, in a large bowl.

Mix until all is incorporated. Divide batter into the 2 loaf pans. Bake for 1 hour or until a toothpick comes out clean from the middle. Cool completely before slicing.

*Adult suggestion-while still cooling and warm, brush 2 tbsp of good bourbon over the top to glaze.

Posted by girlgonegrits at 4:35 AM 2 comments: