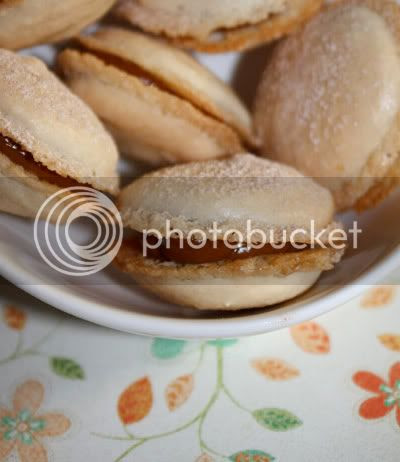 Occasionally I will get this wild hair - my pet name for a recipe - that stands on the back of my neck and fighting the urge to pull it out, I instead throw it on the proverbial "back-burner" that I call my baking/cooking bucket list. It usually happens when I see or read about an intriguing food item that is "all the rage" or when some well established chef on "Chopped" says "I've never heard of this," or, "I don't know what to do with this." That's when that little bit of hair starts to stand up and the chef inside me says "Go on! Check it out and see if you can do that."

This weekend was no different than any other except that I had a couple of those "wild hairs" popping up and bothering me. With a relatively free schedule, I decided to tackle a couple of my bucket-list recipes, starting with cheese. Yes, daunting as it may seem. I love ALL cheeses and I'm not ashamed to say that I would pay high prices for a cheese that makes me swoon (which is basically anything artisan). That being said, as some woman have shoe fetishes, I think it's quite possible that I have a cheese fetish. Do to the high costs of artisan cheeses these days, I can only indulge occasionally. So why not try and make it myself, right?

So with my rennet and sodium chloride purchased at Austin Home Brew and a couple gallons of whole milk I was off to try my hand at mozzarella and buttermilk cheeses. It was surprisingly easier than I imagined. I went to Google and found a mozzarella recipe as well as one for buttermilk cheese suitable for my skill level and well, I made cheese. It was as simple and straight forward as the recipes suggest and in the end, it was pretty good. But it was also a bit more expensive than I expected, when all was added up. So outside of owning goats and cows, I think I will stick to making it occasionally and purchasing it with more understanding.

Next, I moved onto the oh-so-cute little French cookies called macaroons - not to be mistaken for the American coconut mounds dipped in chocolate (though those are quite delicious, too!) No, these cute little (non-intimidating) cookies seem to be all the rage right now, along with a lot of "rage" as to why they never come out right when tried at home. If you Google "French macaroons" you will find quite an array of colors, flavors and expert notes on the how-to's of these sweet little morsels. But be forewarned: you will also find many, many notes on why they don't come out and why they are so hard to bake. This is one of the reasons this recipe has been on my bucket-list.

One of the lovely things about many of my fellow food bloggers is how honest they are. They are not like the famous tv personality chefs (on certain well known networks) who, after hours of production and editing, show you the perfect finished product that make you feel like a complete idiot when yours don't turn out just like theirs. Many bloggers tend to tell you how "those" recipes actually did and did not work. Some food bloggers will even photograph their mistakes so that they don't intimidate the reader. Personally, I take alot of photos of my finished product - but that's usually because I am such an amateur at photography and getting the lighting right takes me a bit longer then a professional. However with that said, I did not go into this venture thinking I would master it. I decided I would just "try" it and if they did not come out then so be it. I don't have to master everything, right? I did my homework. I read many recipes and sites from the European to the American and I decided to take two recipes and combine them. I went with this blog because quite frankly, her honesty warmed me and made me feel more empowered instead of like an idiot. I also checked on Martha because, though she tends to be perfect, her staff seems to work very hard at testing recipes. I also chose dulce de leche as my filling because it was pre-made and, well, have you ever tried that stuff? It's pretty darn well close to heaven! My first batch came out great, but not perfect. Along with not being quite the traditional size, they also didn't have the great "feet" the recipes talk about (a crackly, puffed second layer that measures about 1/16-inch high). But looks aside, they sure tasted yummy!

So, were my items a success this weekend? If you ask my friends and family that I served them too - yeah, pretty much it was. Were they perfect? Nope, not at all. But, I can tell you this, checking a couple more of those "wild hairs" off my bucket list sure does give me a sense of completion - and my taste buds aren't doing so bad either! I'm jus' sayin! 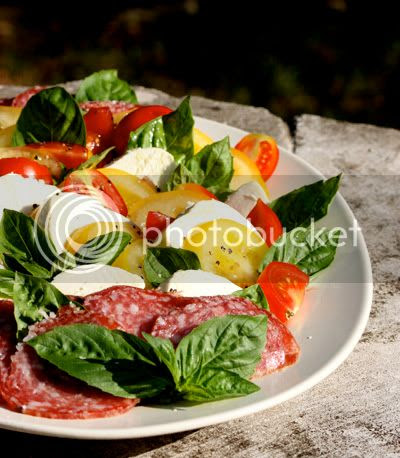 Fresh Mozzarella sliced and served with sliced Tomatoes, Basil, and Salami
I drizzled olive oil and balsamic vinegar as well as sprinkled kosher salt and fresh cracked pepper over the top. A perfect summer antipasto! 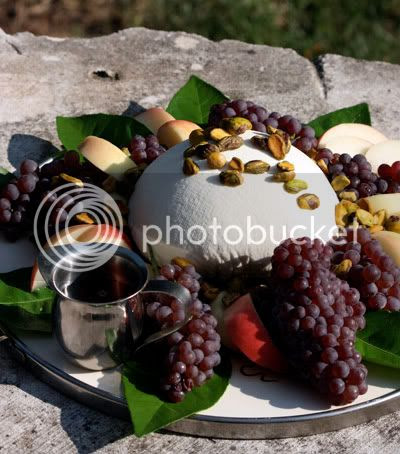 Fresh Buttermilk Cheese that quickly got turned into ricotta because the recipe did not seem to care for the cook making it. I used buttermilk, just like the recipe called for, but I also used the same amount of ingredients in the fresh mozzerella. I skipped the microwave part in the recipe and just wrapped in cheese cloth and let drain in a pan in the fridge over night. I served it with champagne grapes, saturn peaches, roasted pistachios, and blue agave nector. 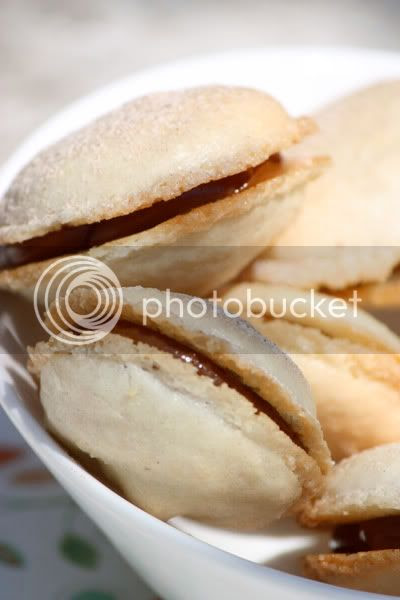 These macaroons just tasted like a little piece of heaven even though they were not as pretty as they could have been. But I did feel good about these, being it was my first attempt. I filled the macaroons with pre-made dulce de leche you can find in a Latin store and dusted the tops with a tsp. of cinnamon mixed with 2 tbsp. of powdered/icing sugar. Without reading all the ins and outs from other bloggers I would have never been able to pull them off. Just another reason why I love food bloggers!
Posted by girlgonegrits at 1:44 PM 2 comments: