Give me an Orange "Julius" 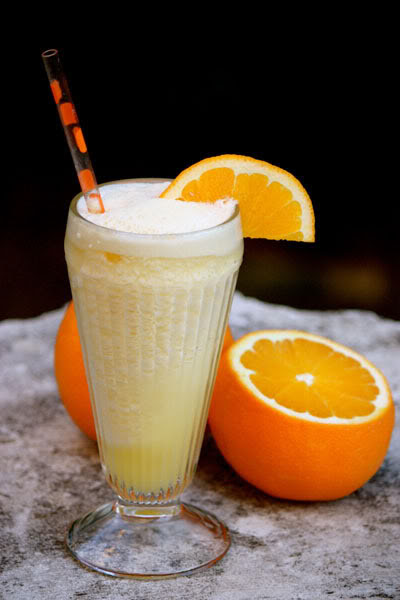 Recently I was craving a drink from my past. I get this craving whenever I see I giant bowl of oranges sitting on my table. Since winter has now sprung itself upon us, I like to keep a huge bowl of citrus in my kitchen to brighten my mood while it's frosty outside - although if you're living anywhere near me, you already know that our winter this year has yet to be anything resembling "frosty". In any event, mix the frosty with citrus and you have one of my all time favorite drinks, an "Orange Julius"! I'm sure you have heard of this drink sometime in your lifetime. It's a creamy, frothy, cool orange drink that was only available at the stores bearing the same name.

This drink grew out of an orange juice stand opened in Los Angeles in 1926 by Julius Freed. He had created an orange juice-based drink that was less acidic and therefore more popular. He did not have a name at first so when people came up to his stand they they would simply say "Hey! Give me an orange Julius!" Thus, the name that stuck.

For some, that name brings back a ton of memories and for others, it sets them off on a wild chase of finding that "mystery ingredient" that makes the drink seem so unique. While doing some research I noticed over and over the many copy-cat recipes from people who think they have found the answer. The funny thing is that though creamy, no ice cream or yogurt is used, and though really rich in orange flavor, no concentrated frozen orange juice was used. Normally I am all over copy-cat recipes that may use an ingredient that has nothing to do with the original but takes on the same look, taste, and feel in the finished product. But in this case, only the original would do.

I can honestly say that I am pretty close to this particular subject as my very first "paying" job was at an Orange Julius in my hometown mall. I remember some of the requirements were that you had to be able to lift 50lb bags of sugar to pour into giant drums with water to make the "simple syrup", or I should say, "sugar water" as I was trained to say. We also had to be able to cut and juice 75 oranges in 10 minutes using an electric juicer, something I still bet I could do today.

At the time, I was excited to get this job because I had loved Orange Julius when I was little and it was a real treat when Mom would take us out for one. I had also always wanted to know what the "secret" was that made them so good. I remember asking my manager one time what was in that powder that made the Julius's so special. Her reply was simple: "It's a secret." The funny thing was that the ingredients were printed on the box and the bags of powder were always lifted out of it before any of us could see. I worked there in the early 80's (before Dairy Queen acquired the brand) and smoothies were just starting to become the "new" health craze, so they had extended the menu of Julius flavors and offered raw eggs for protein. We also served hot dogs and hand-cut fries. For the longest time I had thought the "special powder" was malt. But years later, and after lots of research, I've discovered that it was egg white powder mixed with dry milk and vanilla flavoring. That's it! That's the "secret ingredient"! But it's not just the secret powder that makes it an Orange Julius - it's also the directions on how to make it. So here you go, no need for copy-cat recipes that use yogurt, frozen orange concentrate, or ice cream. Just get these ingredients and a good blender and before you know it your friends and family will be saying "Give me an Orange Julius!" I'm jus' sayin'! 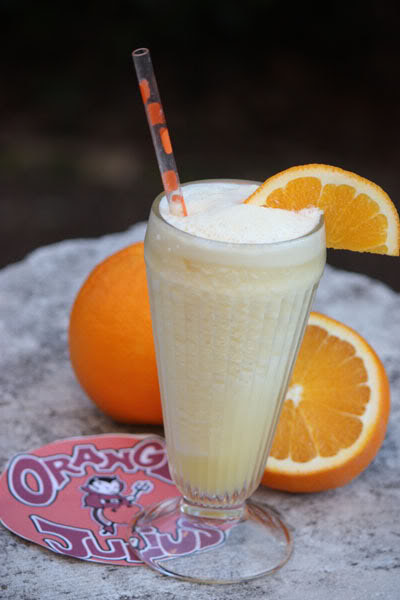 In your blender do the following in this order...
1 cup fresh squeezed orange juice (I swear this makes a difference)
1/2 cup simple syrup (I never said this was a healthy smoothie, just a treat)
1 tsp. dry milk powder (Seems like a little but it works)
1 tsp. egg white powder (you can find this in your bakery aisle where the cake mixes are)
1/2 tsp. of vanilla (this is the only part I differ from because vanilla powder has to be purchased on-line or in a specialty bake shop)
Now fill the rest of the blender up with crushed ice (Why crushed ice? Because it blends quicker with the powders to create that frothy lightness)

Thats it! That's the real deal my friends.
Posted by girlgonegrits at 8:14 AM