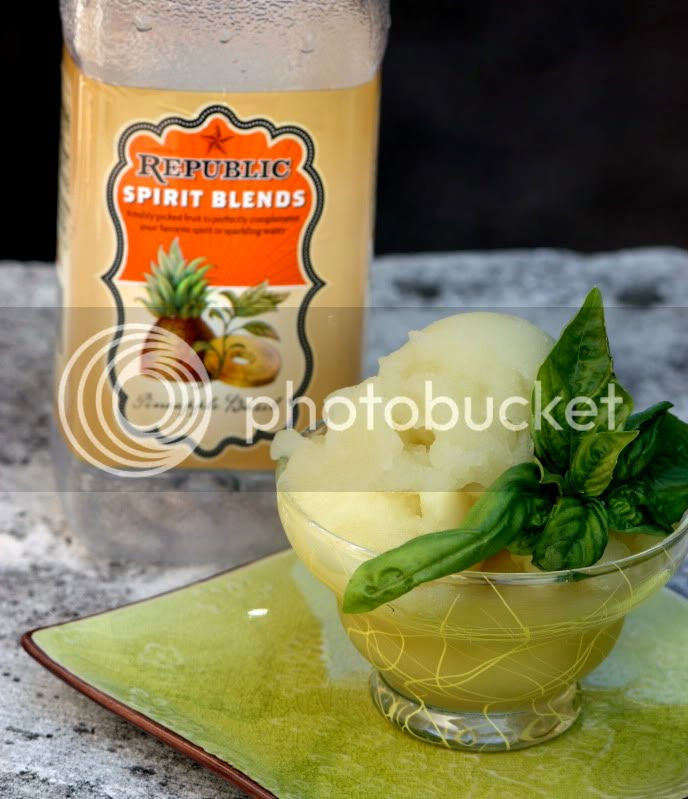 Not too long ago, my best friend and husband decided to start his own blog. If you've read through my past posts, you probably already know that one of his passions is tequila. Combine his passion with my food passion and it should come as no surprise that our blogs would eventually cross paths. The funny thing is that I'm not much of a tequila drinker - actually, not at all. That, however, does not in any way stop me from going on little adventures with him to tequila tastings or stopping at the odd liquor store as he runs in to look for rare bottles. After all, if I had a dollar for every time I've dragged him along on one of my strange culinary adventures we would both probably be retired from our day jobs. Just kidding, of course, but the truth is that while our interests in food and alcohol may differ, we certainly love each other enough to explore each other's passions. Besides, there's always more to an event than meets the eye and I find absolutely no reason not to look for a little culinary news where I can.

A perfect example was last month when Casa Chapala in Downtown Austin hosted a tequila tasting event to celebrate the bicentennial anniversary of Mexican Independence. Amongst the more well known tequilas (Patron & Cazadores) were the not-yet-famous, but not-to-be-ignored Texas tequilas (Republic, Gran Jubileo). As I was standing there with @tequilabob23 while he was introducing me to the reps for one of these companies, my eyes zeroed in on something culinary. In addition to offering samples of their tequilas, Republic Tequila was also promoting their new Spirit Blends line of organic mixers, made to be combined with their tequila or mixed with other spirits to create uniquely different cocktails. Of course, my mind was moving to what I know best and after sampling the four flavors, each indigenous to the South, my wheels were turning. That was all I needed and the next weekend @tequilabob23 was off to our local liquor store to pick me up one of each to play with.

First on the docket: let's see how well these infused agave-based simple syrups hold up on there own - no doctoring. I poured the first bottle (Pineapple-Basil) straight into the ice cream machine and twenty minutes later I had a sorbet with a perfect consistency. Delicious and refreshing on it's own, @tequilabob23 had to top his off with a drizzle of Republic Plata, which made for a tasty spiked granita. Two thumbs up!

Then it was time to mix a cocktail. Since I don't drink tequila, I used Deep Eddy Sweet Tea Vodka (another Austin-based spirit), mixed in some of Republic's "Jalapeño-Lime" flavor and topped it off with a splash of club soda. Another winner! The "Austin Sidewinder" has a Texas-sized kick that will get your boots-scootin' on any dance floor.

Lastly, I decided to take the "Prickly Pear" mixer and reduce it to a thicker syrup to glaze a simple pound cake. The cake was moist and sweet and left people wondering what that delicious taste was. Still on a roll to create more, I started getting hungry for lunch and craved something on the more savory and healthy side. I mixed up a vinaigrette, once again using the Jalapeño-Lime mixer with a little olive oil and Dijon mustard. I tossed it in a simple mixture of julienned veggies and that became a tasty low-cal lunch with lots of flavor and color. To enjoy with my salad, I filled up a glass with ice and poured in 1/4 cup of the plain Lime mixer and finished it off with seltzer for a refreshing lime spritzer. Overall, I'd say that these four mixers passed my initial culinary curiosities with flying colors and I plan on continuing to play around with them even more over the next few months. So was this a perfect match? I would say so, just like my husband and I, it looks like I've found a winner with Republic's Spirit Blends proving my theory that when you have love and passion, opposites can always find a way to attract. I'm jus' sayin'! 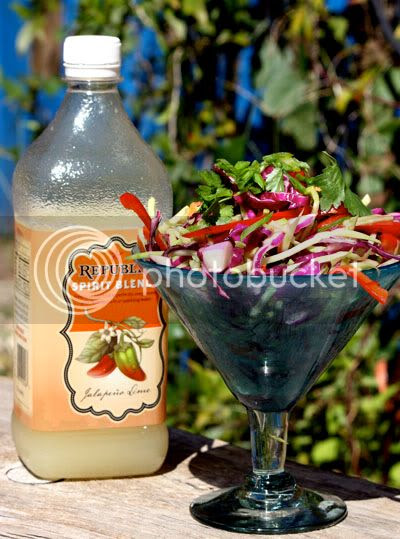 Toss the above in a bowl with the following vinaigrette:

Place all in a jar and shake until thick and incorporated. 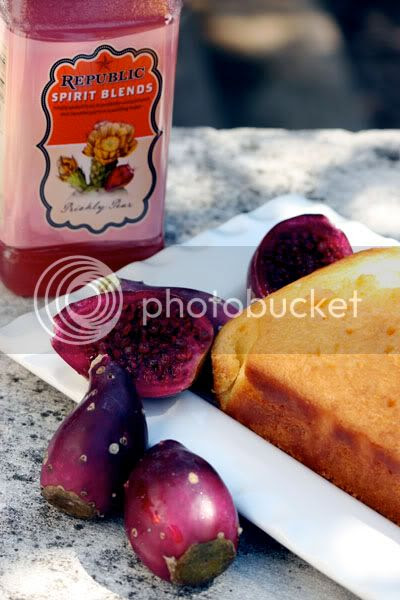 In a small saucepan bring the prickly pear mixer to a boil and reduce to half.

Poke holes with a toothpick or skewer all over cake and with a pastry brush gently paint on top of cake. Keep painting until all is gone. Wait 30 minutes for flavors to absorb.
*If making pound cake from a box or scratch use 1/4 cup of the prickly pear mixer for 1/4 cup of liquid used in recipe.
*For a more festive cake - after reducing mixer add 2 Tbs. of Republic Plata Tequila to the syrup before painting on top of cake. 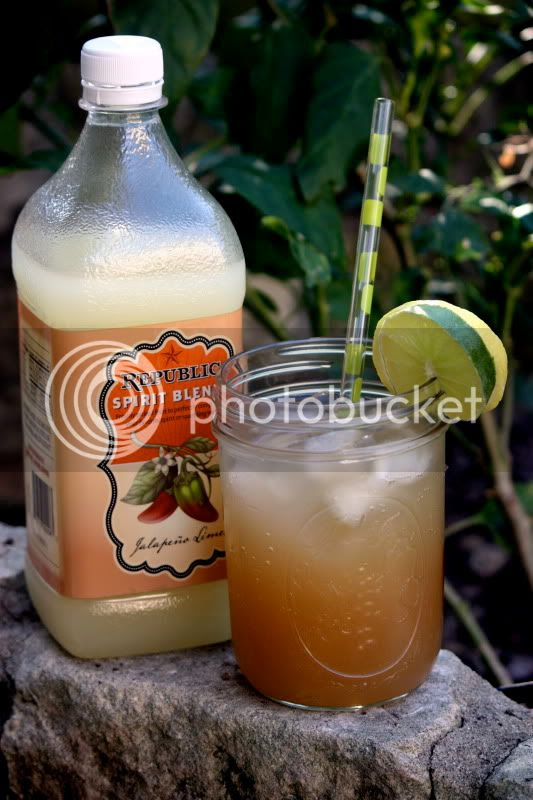 2 Parts Spirit Blends Jalapeño-Lime
2 Parts Deep Eddy Sweet Tea Vodka
Pour over ice, top with club soda and garnish with a lime wedge
Posted by girlgonegrits at 6:31 AM No comments: 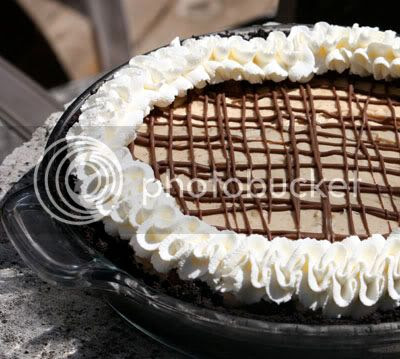 Lately I find that I'm always in a hurry to get from one place to another. I will be busy with my daily chores and errands before I realize it's time to rush home and put dinner on the table. Because I am constantly on the prowl for new recipes, I always keep my ears open for conversations about food. Whether I'm at the grocer or having coffee with a neighbor, I am constantly jotting recipes down on paper and throwing them in my back pocket or purse, only to pull them out later to try. It's okay if it's just scribbled because I generally tend to tweak them to my taste anyways. I provide that information as a background because this next recipe came by way of coffee talk. I was having coffee at a neighbor's and chatting about food when she told me her son had made this pie. She got the recipe and tweaked it to make it to her taste and then she quickly jotted the list of ingredients down on a piece of scrap paper for me to tweak and make my own. I find this happens more often than not with many Southern cooks. It comes as no surprise to me that in most any conversation, food is somehow, in some way, worked into the dialog. So it makes perfect sense to hear midway through a cup of coffee "Oh I made this really good pie for Sunday supper last week" sandwiched in between "did you hear Aunt June is feeling under the weather?" and "What is going on with those Longhorns?". It's at that point that you stick your hand in your purse for a pen and paper. Who says we can't carry on a good conversation while figuring out what's for dinner? It's called multi-tasking! I'm jus' sayin'!

Mix the following together until creamy and incorporated

Dianne's Tweaks: she used a chocolate crust and she crushed a handful of butter toffee peanuts to sprinkle on top of finished pie.

My Tweaks: I place half the filling in the pie shell and then drizzle 1/4 cup of hot fudge sauce all over - I then cover that with the rest of the filling, I garnish with shaved chocolate and whipped cream.

How will you tweak it?
Posted by girlgonegrits at 6:19 AM No comments: