How do you fondue?

"There is nothing quite as communal as sitting around a pot of molten cheese and dunking bread and veggies in to it," said my Mom, circa 1973. 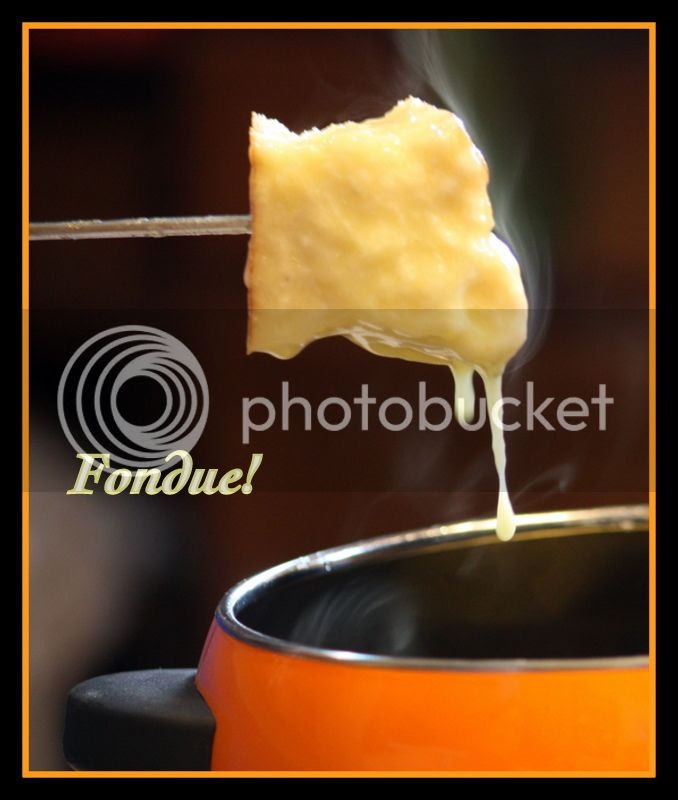 I remember the very first time I had fondue. My mother had either received a fondue pot as a bingo gift or a Christmas gift, not sure which as I can't recall. However, when she opened up that box with the heavy foil-wrapped package inside and plopped it into that pot, I was instantly taken away with the strong aromas of white wine and gruyere.  As the cheese was slowly melting in the pot, I would fantasize about being transported back to a little chalet in Switzerland (specifically, the one depicted on the back of the fondue box). That little red fondue pot was a part of many celebrations in our house over the years. In fact, it was usually only brought out for special occasions. I'm not totally certain, but I believe it was Graham Kerr that may have introduced me to the fact that you could actually make fondue from scratch. At the time I thought that was so novice as that little "Alpenhaus" box had served me well for so long. I remember playing around with meat fondues, fun but having only one pot led me to want to put all my efforts into molten cheese.  As a teen my Mom would occasionally take me to this restaurant called "The Monks Retreat" where the waiters wore monk-styled robes and the fondue pots were delivered to the table. I thought this was genius at the time. Sadly, not everyone else had and the business never made it.

I found a whole new love for my husband when he ordered fondue for me on our honeymoon in Alberta, Canada.   With snow falling outside and "The Sound of Music" piping through the hotel sound system, I was pretty sure I had finally come full circle to that little "alpine" box.  Then some years later on our anniversary, he took me to La Fondue, a restaurant that specializes in fondues.  The fact that it is still there leads me to my theory that people still love "communal dunking".  Even The Melting Pot, another well known chain, seems to have had some success with their stores across the country. My in-laws gave us their 1970's Harvest Gold fondue pot about 20 years ago and we have used that pot over and over through the years indoctrinating our kids into the art of communal dunking.

I was recently with friends in Thrift Land, our local treasure cove, when I came a cross a practically brand new pot just sitting there, beckoning me to commune again. Of course, it pretty much had me at the bright orange color but for the first time it occurred to me that if I had 2 pots, I could do cheese AND meat or cheese AND dessert at the same time. I paid my $5.00 and off I went.

Our wonderful next-door neighbors have fondue once a week (I swear I'm not making this up). It's one of their versions of interactive cooking that they love to do as a family. She says it's sometimes tedious prepping everything but the pay off of sitting around the table and communing over food and life from a single pot is priceless.  I guess that is what I love the most about the art of fondue, that it takes time to prep, cook, and dunk which generally leads to more time together which, lets face it, our busy schedules don't always allow for this luxury anymore.

So was my Mom introducing me to just a new "food fad" in the 70's?  Or have the Swiss simply been one-up on us since the 18th century with their communal fondue? All I know is that I am now the proud owner of 2 pots, which means double-dunking for me and my family... I'm jus' sayin'! 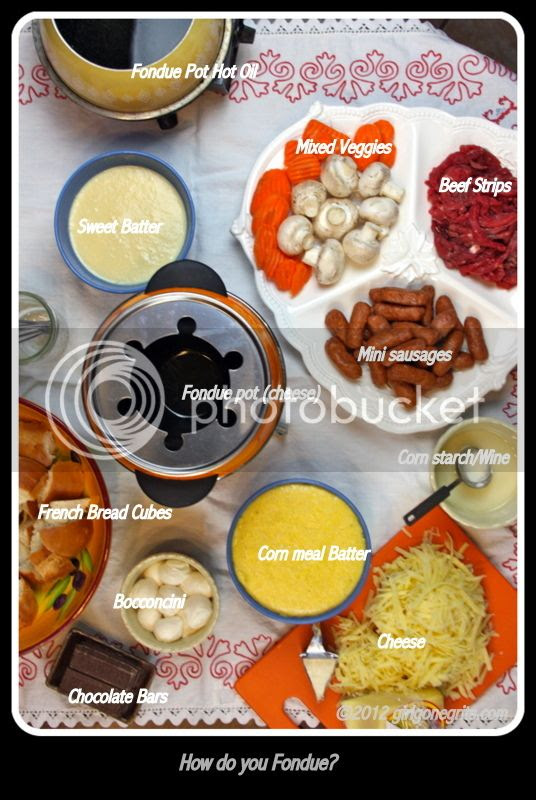 1 Cup of grated Gruyere Cheese
1 Cup of grated Swiss Cheese
2 wedges of Laughing Cow Cheese (Sounds strange but after researching, this came up in several recipes and gives just the right creaminess to the cheeses above - of course, this is optional)
1 1/3 Cup of dry white wine
1 Tbs. of kirsh (I did not have any so I opted out of this and it tasted just fine)
2 Tbs. of cornstarch

Mix 1/3 Cup of wine with corn starch and set aside.

In a fondue pot set on low, combine the 3 cheeses and 1 cup of wine. Slowly melt, this will take some time - be patient and keep stirring. When it appears melted add the wine and cornstarch mixture and continue to cook, bringing the heat up a bit to get a small simmer with small bubbles. Stir. When all is incorporated, start dunking with the options listed below (or whatever else you might fancy!) Good Bread Cubed - Try rye or pumpernickel for a twist over the classic French. Cube Garlic Texas Toast for a twang! Pita and Nann bread is also great cubed up. 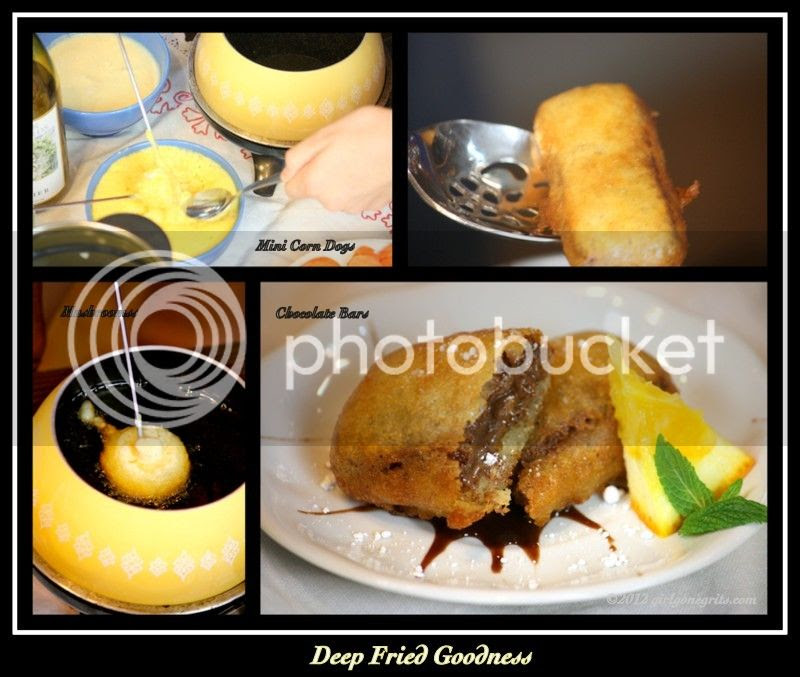 Some like to use hot broth instead of oil and I think that is delicious and healthier, however, I wanted to incorporate a meat and a dessert fondue in one pot so I went with the oil.

In a fondue pot on highest setting, fill with 2 inches of vegetable or peanut oil. Bring to approximately 375 degrees F (if the oil starts to smoke, lower the temperature as each pot may have a different setting on high).  It should be obvious, but it is always important to note that this is a pot of scalding hot oil so be mindful of little hands that may be taking part. Fondue pots must be plugged in to an electrical outlet, so be careful that the cord is not run where people might trip on it.

Seasoned Meat
Season thin beef strips, chicken breast chunks or fish/shrimp with your favorite seasoning.  Skewer and drop into the hot oil and move around with your stick to get all sides cooked. A slotted metal spoon to retrieve food if it comes off of the skewer is good to have on hand as well as some paper toweling to absorb extra oil. 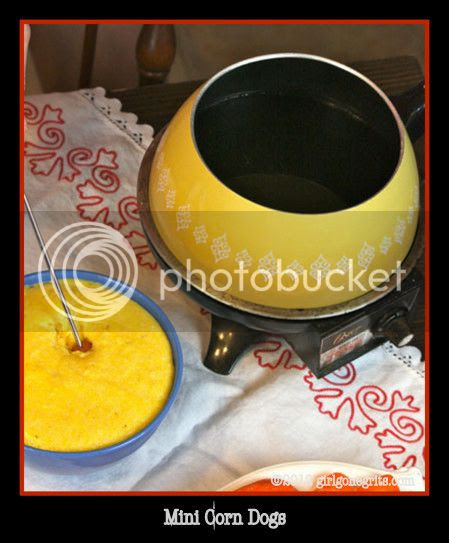 Mini Corn Dogs
My daughter quickly mixed up a box of Jiffy corn bread mix per directions on the box. She placed a small bowl of the corn batter next to the fondue pot, skewered a little smokie sausage and submerged the smokie into the corn batter. She then dunked that into the hot oil to fry, turning it a couple times to get a nice, even golden brown color, roughly 2-4 minutes total.  Once removed, she had a fondue pot corn dog.  Dip in your favorite mustard and enjoy!  This same batter can also be used with vegetables for a interesting and tasty twist. Dessert Fondue
Chocolate is always a favorite and you can get plenty of chocolate recipes here.  Keeping with the hot oil, we made a pancake batter using 1 cup of Bisquick, 1 egg, and 1/2 cup of milk. We put the batter in a small bowl by the fondue pot and dipped one of our favorite mini candy bars (Nestle Crisp) into the batter and then dunked in the hot oil. It was then turned once until golden and removed to a paper towel to drain off excess fat.  It was finished with sprinkled powdered sugar and the taste was delicious. Some other things to dip and fry: Twinkies; pound cake; pears; apples; and frozen cheese cake balls.

It may take a few tries to get the right amount of batter on each item so don't be discouraged - that is part of the fun of working/communing together over this meal. Try your own methods, ideas and favorite foods to see what works and tastes good for you and your family.  If you end up having to eat a couple of deep-fried candy bar rejects, it can't be all that bad, right?

Lastly, here are some great tips courtesy of FondueBits.com.

Don’t use a cheap cooking wine for fondue (or for anything else for that matter). Instead use a decent Sauvignon Blanc, California Riesling, Chenin Blanc, or Swiss Fendant.

As you add the handful of cheeses to the simmering wine, stir in a zig-zag or figure-eight motion to help break up the cheese and blend ingredients.

The hard crust left at the bottom of the pot is called “la courte” or “la religuese”, and is considered a delicacy. Pry it out and serve pieces of it to your guests.

Avoid mixing water into fondue. If the fondue is too thick, add more dry white wine. If it is too thin, more cornstarch and cheese. Keep the heat as low as possible so the cheese doesn’t become rubbery.

Fondue recipes don’t double very well. If you need more fondue, it is best to make it in another pot.

Wondering what to drink with your fondue creation? Try more of the wine you used in the recipe. If you want more of a full-bodied wine, Bordeaux, California Merlot, Chianti, and Cabernet Sauvignon work nicely. Hot black tea, hard cider, and beer also deserve mention.

Posted by girlgonegrits at 10:16 AM 7 comments: